When you find something you like, you come back to it, right?
It has been three years since I've read a book by Eloisa James, so I figured it was time for me to indulge in some good historical romance.
Today I'm writing about Desperate Duchesses, the first of nine novels in Desperate Duchesses book series. 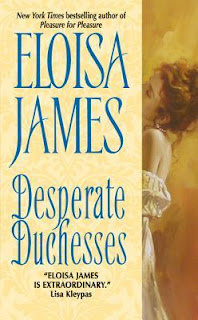 Lady Roberta St.Giles falls in love with a duke she never even met. She saw him across the ballroom and knew he was the right man for her. He's intelligent, experienced and calculating. He also has no intentions to ever get married.
But then something (or someone) happens that makes him realize marriage is exactly the thing he needs. And lady Roberta is exactly the woman that would perfectly suit the role of his duchess.
But the earl of Gryffyn can't really agree. He knows Roberta wouldn't benefit from that marriage and she would never be happy with the duke.
He is, nevertheless, sure that she would be happy with him.
The duke or the earl? Which one will it be? 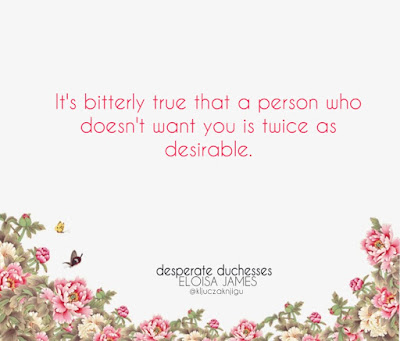 If you've ever doubted women could multitask, this novel will show you that you have nothing to fear. It takes one woman to make one decision to start a massive chain reaction that would impact the lives of various characters. Did she do it because she was somehow desperate? Or precisely because she wasn't?
Being a part of London high society means one could be many things, but all those people have on thing in common: more than anything, each and every one of them hides his true intentions.

I liked Desperate Duchesses because it showed how different people really are. It shows that our (and those of the character's) intentions are always selfish in a certain matter. Sometimes falseness and mystery are the weapons used by those who want to achieve their goals - but the goals could change at any time - so one should be ready to cunningly adapt to the new situation. 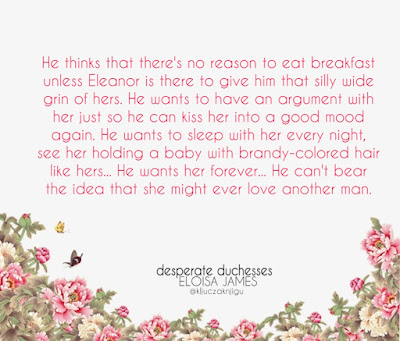 James succeeded to tell us two stories in one single novel and did it so well that we spend the entire novel wondering about what will happen next. Who will end up with whom...

Her characters are people with interesting personalities and that makes her story one of those we all love to come back to. But we are talking about Eloisa James after all. Have somebody ever doubted it could end badly?

Did you read Desperate Duchesses? Did you like it?


Here you can find the review of this novel in Croatian.