Review: Sabaa Tahir: A Torch Against the Night

Last week I've been looking around Amazon, searching for my next read and I wanted it to be something different. I ended up with Egomaniac, because I just couldn't resist him, but this week I didn't deviate from my original plan. It had to be fantasy, with a bit of magic and a lot of mystery.

And then I remembered A Torch Against the Night and how I still didn't read it. Unforgivable.
It's the second book in An Ember in the Ashes book series, and it will be followed by two more novels, once they get published in 2018 and 1019. 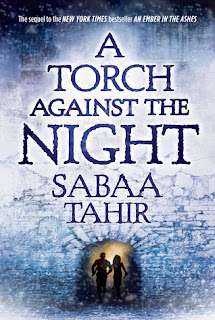 After Laia and Elias escape from the heart of the Empire, they find themselves alone, unprotected and exhausted. And their journey has just begun. On their way to Kauf, the best kept prison in the Empire, the travel slowly and carefully, hiding from many dangerous enemies that get closer with every step they make.
Laia and Elias meet with some old and new allies, but even that doesn't seem enough to help them succeed.
And then something even worse happens. Something that could make Elias brake his promise and leave Laia. Will he?
And would Laia be able to save her brother without him?

Not so far away, Helena is forced to start a terrible mission. As his Blood Shrike, Helena is bound to obey every order Emperor Markus gives, and this one will make her choose between Elias and her family. She has to find Elias and Laia and kill them both. Everything's at stake: the lives of her family and Elias, the lives of Scolars and her own.

What will she choose? Will she follow thing she believes in or will she be, like the rest of her family, faithful to the Empire?
Until the very end. 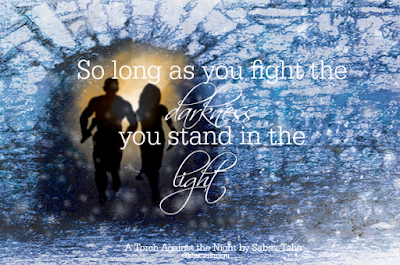 Oh, come oooon!
Why do I need to wait until next year to read the third book?
Why isn't that book already written? Why aren't all of them?
Seriously, miss Sabaa Tahir, who needs to eat and sleep when people are waiting? 😂

There's just no way you would be able to put this book down once you start reading it. The tension, the anxiety, the fear and wild expectations will make you frikin' read it all at once! Blink, and you've missed something. There's no time to take a breath with the Torch.

This book focuses a bit more on Helena. In the novel number one, we had Elias doubt his life and thing's he's done, and now Helena Aquilla needs to make an equally difficult decision. More than one life depends on her, and there's no one to save her, no one to help her.
She's the Torch against the night and she burns. 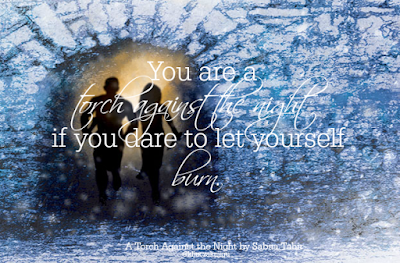 A Torch Against the Night is a book worth obsessing about. It's a must have for all of you who love fantasy, magic and the unexplainable.
The characters evolve naturally, they become more mature, more merciless, but also more compassionate. Their abilities get more pronounced, but they still get to keep their mystery.
Will those skills be of any use in some of the critical moments later on?
There are also a few people whose intentions I couldn't really read. What are their actual goals? I got to love those the most. I even started to root for them to change their game plan and try to do the good thing.

I also like the plot, the way it flows and makes me understand nothing I expect would come to be. The Torch was meant to surprise me.
And it did. The end made me eat the entire chocolate bar to make myself feel better. The struggle was real.

You need to read this book during the next few weeks. Now's the time. There will be plenty to eat and a few (obviously wonderful) presents to comfort you while you wait not so patiently for the book number three.

Let me know how do you liked it,


You can find this review in Croatian here.
Here you can find the review of other books by this author: Sabaa Tahir: An Ember in the Ashes