Review: Holly Black: Queen of Nothing

„My sweet nemesis, how glad I am that you returned.“


(Queen of Nothing by Holly Black)


Why did this have to end? Whyyyy?


The Folk of Air has been my favorite new adult fantasy book series since the day one. I've been drooling over the third part like baby over the candy for the past month, since it has been published. Even longer, since the day I've read The Wicked King, and it let me uncomfortably obsessed with wanting to know how the hell this story ends. Now


The Queen of Nothing


is finally out, and I love it. 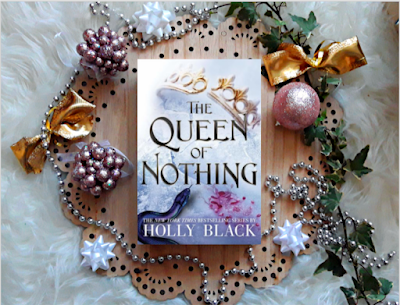 After being sent to exile, Jude has stayed out of Fairyland, far from the things she hates and people she would never admit to love. She lives the life others have made her live, until one day her twin sister – the traitor – comes asking for help.


Going back to Elfhame would mean mortal danger – if High King found out she has returned, he would have her executed. But Jude cannot fight the need to save her sister, and Cardan – the King that hates her.


Will she succeed? Will she stop the threat the Elfhame faces? Will she be able to win back her throne if her greatest enemy is her husband, the Wicked King himself? 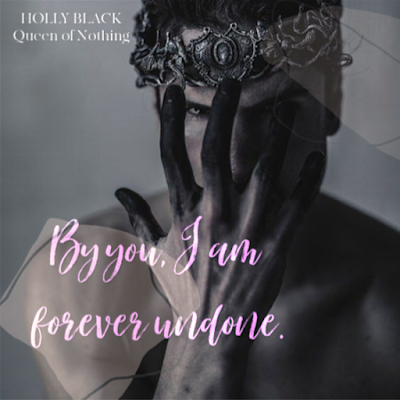 The Cruel Prince and The Wicked King were perfect, but wait until you read The Queen of Nothing. Once, there was a mortal girl aching to belong, merciless to their enemies, ready to dominate the King. Now, let us meet the banished Queen, the one who submitted, the ruler of nothing.


Fantasy novels are the greatest motivators, don't you think? They show us people ready to turn the Earth upside down to get what they consider is theirs, justice or love. They overcome obstacles, fight and claw their way through every challenge and problem that comes their way. And if we let them, they could be the source of the rush that makes us move, stand up and make things happen.


They also make us look deeper into the meaning of hatred, tolerance, empathy and hostility. Jude and Cardan are the best examples of those emotions, those that could easily bring the destruction upon the whole world, both human and magical. They were both made think by their parents and people around them, that they should follow others to be accepted, to forget who they were, for their lives to have worth and meaning.
It is dangerous to be lost, but still, to some extent, we all are. That is why we can understand their struggles. 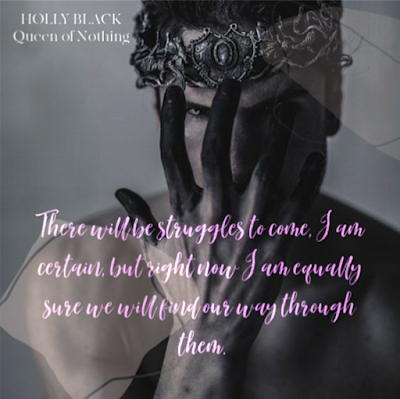 This is a magical, dangerous story. A story that breaks the borders between what is human and what belongs to fairyland. As superior beings, Fae look upon humans as though they have the right to decide their fates. As a human, Jude has to work under the pressure of her own weaknesses and foreign demands. She feels attraction towards the world that is not her own and is, and is by accident the only one who can save it.


On the other hand, we have Cardan, predestined to be become the destroyer of the Crown, with a sinisted prophecy hanging over his had. He’s the character that has us doubting his true intentions. We see him mostly through Jude’s eyes, and it’s making us anxious and uncertain of his true nature.


The Queen of Nothing shows Jude and Cardan in one final battle, the battle for the throne. Tension, sacrifices and danger... The book is full of scenes that make us bite our nails. New threats arise at the least opportune moments.


But this is also the story where true emotions are revealed. The characters have grown, changed and evolved, found the way through the darkness. Admitting those feelings enabled them to make some final choices – those that would bring them to victory.

***
QUEEN OF NOTHING ON GOODREADS
OFFICIAL WEBSITE OF THE AUTHOR
BUY THE BOOK HERE.