A few days ago I was going through my posts and saw an unforgivable thing: it has been almost a year since I wrote the last review of some historic romance novel. A year! Now, I don't consider myself as a romantic, but now and then I do need to fulfil my need for some mighty prince charming.

As it is, the male protagonist in the novel In the Prince's Bed is a prince's son. The novel is a first one in Royal Brotherhood series, followed by the novels To Pleasure a Prince and One Night with a Prince. 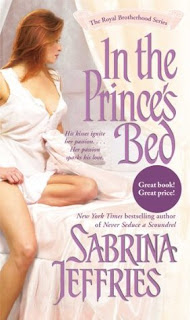 Katherine Merivale has a problem. Her best friend, and the men who meets her every criteria in what a future husband should be like, still makes no move to propose marriage to her. Her mother is getting nervous and her siblings are suffering the lack of means for their education and therefore, their future. She is supposed to inherit a great amount of money, but only after she gets married.
Alec Black needs a wife with a great dowry to help him pay off his debts and invest in his business. All he has to do, to make his plans come true, is marry a rich girl before she realizes about his deception.
But after meeting Katherine, Alec recognizes that there's a real passion between Kate and him, and as much as he hates to admit it, there could be something even more.
Unless she finds out the truth about his intentions first...

Don't you just love the charming way these kind of novels capture your attention? I can't resist the way those mischievous heroines innocently bat their eyelashes while stepping outside of the line of what it is considered as a proper behavior. They make us feel restless, wild and even daring. More than we usually are, anyway. We follow them on their journey rooting for their ideas and supporting their sometimes not very bright decisions. We want to be them, because they are strong women fighting for their rights in times when women were not seen as  equal to men. Sometimes we find ourselves in them, and they give us hope in a better tomorrow.

In this novel I found that perfect harmony between a bold humor and true and deep emotions that put to the test human destinies and reader's nerves. The characters are interesting and funny and the plot is worth your time. There's nothing stopping you from reaching for this book.

Let me know if you liked it!