Since I read In the Prince's Bed a few weeks ago, I couldn't wait to get my hands on its sequel, and the second book in series Royal Brotherhood, To Pleasure a Prince. If this is the first time you came across me mentioning this particular historical romance series, you can find the review of the first novel here, so you don't miss anything important. 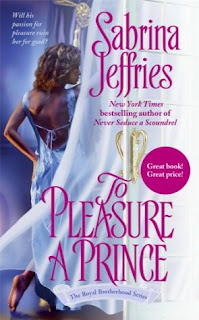 We've already met Marcus North, Viscount Draker, in the first installment of the mentioned series, where we got to know him as a cold and calculated man who hates...well, practically everyone.
In To Pleasure a Prince we meet his lady, his better half, the woman who'll make him rethink about his priorities and put an end to his insecurities, Lady Regina Tremaine.
Lady Regina wants him to let her brother court Draker's sister, an idea Marcus doesn't even want to listen. But then something occurs to him, after taking a good look at little miss Tremaine- he will let her brother court Louisa if Regina lets him court her.

Regina accepts but he will not make her life easier. Draker will show her exactly how impolite and untamed he really is. Will she be able to love him anyway? Or is Draker about to cross the line that will cause him to stay alone forever? 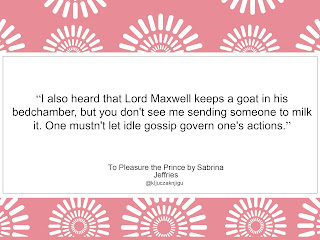 This novel shows us a stubborn man trying to fight for his values, but forgetting that they may have changed through the years. Marcus is a man of great possessions and even greater arrogance. There are moments we could actually call him a bit dum for insisting on some self-imposed rules that make no sense to the rest of the world. It's really interesting to see how his beliefs are changing and he becomes a better man.

Regina is a character with a secret. Her secret makes her live a careful life and depend on in every moment on her cousin. She's ashamed of her secret. It makes her feel scared of her future and her happiness. It makes her doubt her sanity and mental health. Regina's secret is, in her time, still not explored enough for her to know that she's a perfectly healthy women with a reading disorder. She makes us see her courage through her fear, and with it, she becomes a character we can all find ourselves in. 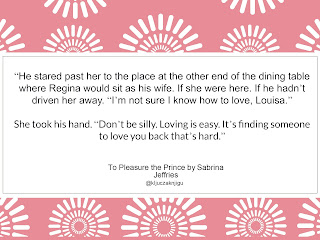 Sabrina's novels always make me smile. You can read To Pleasure a Prince as a standalone, but I do recommend reading In the Prince's Bed first. It will give you a proper introduction and a glimpse of a third brother, Gavin, who you can properly meet in On Night with the Prince, the final installment in Royal Brotherhood series.
Be sure to let us know what you think. Until next week,

many kisses from Rose :D