Review: Sabaa Tahir: An Ember in the Ashes

Amazon named An Ember in the Ashes best young adult book of 2015, did you know that? I thought it would be a good post opener ;)
Film rights were optioned by Paramount Pictures in 2014, before the book was even published and Mark Johnson is to produce the film.  Are there any more excuses not to read this book? I don't think so.
If you want to know and see more, visit the official website of the author Sabaa Tahir and look for the book trailer. Do you like the costumes and the weapons? I can't wait this movie to finally happen!
Oh, and don't forget to look for the sequel, A Torch Against the Night. It was published a few months ago. 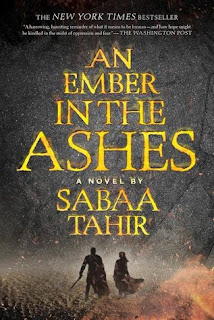 Laia lives with her grandparents and older brother, until one day they get brutally murdered and her brother gets to be accused of treason and taken away. To survive, she has to run for her life, but to save her brother, she'll maybe have to sacrifice the last thing she has left: her life. She becomes a spy in the Empire's greatest military school, and is forced to act as a slave for its merciless Commander.
Elias, the school's finest soldier is plotting his escape. He is a soldier, but he's a slave. After years of trying to live with his guilty conscience, he's ready to sacrifice his life by betraying the Empire and run away. But destiny has its own plans for him and those include him staying inside the walls of his school.
There, Laia and Elias will meet, and put things in motion that will change the future of their empire. 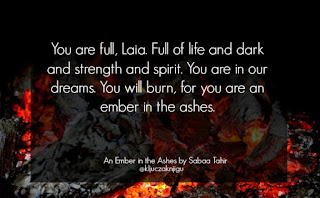 This novel fits into the young adult genre, but don't let that make you think you're too old or too mature for it. It will face you with deep morally questionable problems that will make you think hard about your answers. Loyalty versus treason, fairness to others against endeavor to succeed in our own goals no matter the cost- there's no right answer in this novel. An Ember in the Ashes demands from its characters to show their humanity in times when cruelty is the only thing that can be forgiven.
If I were Laia, what would I do? If I were Elias, what would I do?
It will make you think about that.
This is a book about sacrifice and book about victims. About how to betray everything we care for to save ultimately it. 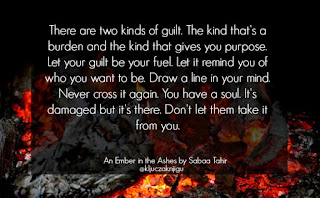 If you're like me and you love interesting and dynamic dialogues more than plane narrative, you'll love this one. The plot's nicely shaped through conversations and just a few necessary descriptions. Some reviews I've came across say that the small percentage of inner monologues and scene portraying could cost the characters their credibility, but I say they say just about enough about themselves by just talking. Who knew!

If you're a fan of The Throne of Glass by Sarah J. Maas, make sure to look for An Ember in the Ashes. You won't be sorry.