When one guy claims that the size doesn't matter, the other, better endowed, usually says something like: "Look, another guy with a small one." Ladies, did you ever happen to be in the earshot of that kind of conversation? I don't know what kind of people I spend my time with, but I had the opportunity to witness a similar exchange.
What I didn't have (and I don't know should that make me sad or relieved) is the chance to find myself in the situation our heroine found herself somewhere around the page 50, in the coffee shop scene. But the series I'm talking about today made a good impression on me, almost as good as the impression he has made on her.
Today, I'm writing about Imperfect Love book series, and its three novels Hitched: Part 1, Part 2 and Part 3. 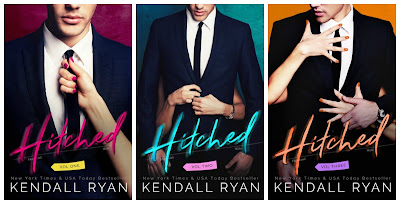 The thing that Noa Tate has to marry Olivia Cane is not something that would give him nightmares. But there is that one part of the deal, and he doesn't think she's gonna like it very much.
Just to be clear, he has nothing against doing his best to knock up his unexpected fiancee/wife, but he's also not too keen to become somebody's daddy just yet.
But he'll do it, because millions of dollars are at stake, along with many people's jobs so it's time for him and Olivia to start taking things seriously.
Nobody ever f*cks her over. She worked hard to become what she is, and now they want to make her marry Noah to be able to keep what's rightfully hers. She has always had a special weakness for him, and he makes it easy to forget her inhibitions. But they have to stay focused.
Their marriage will be purely for show. There will be no love and there will be no sex.

Be honest here with me, do you really believe that? 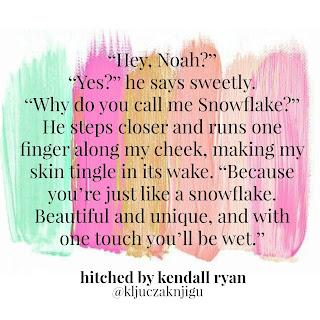 Noah, Noah, Noah...I have to admit, in the beginning, I shared my opinion on him with Olivia. That guy was a jerk. Arrogant and pretentious, with no knowledge of what a word humbleness means. He was persistently going after everything he wanted in life, which is fine when you (besides you work) have noble goals, and he didn't. But I've forgiven him because he has shown his gentle and caring side and deserved his happy ending.

Olivia had other kinds of problems. That girl should have really learned how to loosen up a bit. Have a glass of wine, woman. Have a whole bottle! You were the one staring at her laptop the whole day and I'm the one who got a headache from it by merely reading about it. Noah is a perfect guy for her. They make each other better by going through life together. 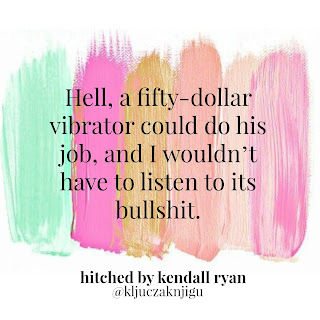 The readers usually read novels by Kendall Ryan by default. Her books offer simple but funny stories, unexpected plot twists and interesting dialogues. This series is full of humor and playfulness and that is always a bonus when talking about a romance/erotic novel.
We're going to pretend the contract that made Noah and Olivia marry is legal and just enjoy the story. We're here for the romance, right?

So, have fun with these two, and be sure to leave your opinion about the books below.

Find the review of this series in Croatian here.