It's been a while since I've read the first novel in Brothers Sinister book series and I can't actually believe it took me so much time because the first novel was so beautiful. I'm happy to be writing about the second book, The Heiress Effect, another masterpiece by Courtney Milan.
Welcome! 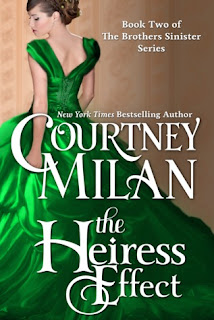 Jane Fairfield has only one goal in her life and nobody is going to stand in her way. The high society of London can think of her as of a stupid heiress. They can make fun of her. They can believe the worse about her - that's exactly what she wants them to do. They couldn't make her job any easier.

Oliver Marshall has a job to do. Actually, it's not something he has to do, he was rather blackmailed to do it. Oliver was dealing with injustice his whole life and now he has to deliberately hurt another person and that goes against everything he believes in.

How will the excentrical duo fight against the injustice and people who only care about their own personal benefits? Will they get to know yet another enemy in one another or will their union result in more than one kind of victory? 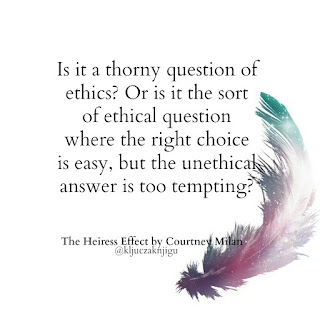 Meet Jane. Jane knows nothing about fashion. No, that's not true, she knows enough to realize her gowns look hideous, but she actually likes them looking awful. Jane is a character whose background explains perfectly her life choices.

Oliver Cromwell is...no, wait. Oliver Marshall is a man who knows how cruel the world really could be. As a bastard son of a duke, he has high ambitions and low chances to ever succeed. He is now faced with a moral doubt that could change his life forever whatever the decision he makes may be.

This is a story of two people faced with everything wrong in this world. Is there any way they could find an out of a risky situation and still make us smile while doing it? 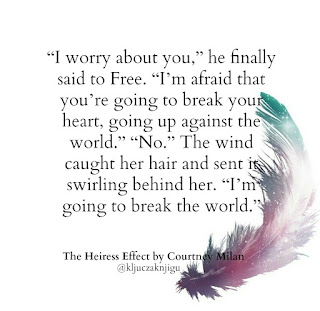 Just like the last novel by Courtney Milan, this one too - besides giving us a nice and warm love story between two very different, but very similar people - takes us on the journey into the 19th century London. Once more we meet two protagonists of high moral values, who think outside the box and fight for an unimaginable cause- the voting right.

Courtney combines a story rich in historical detail and believable romance. Her plot is deep and her scenes are without flaws. There's humor, there's friendship and just enough eroticism to make us continue to read all of it at once.


If this is your first time reading about some novel by Courtney Milan, I recommend starting with the first book in Brother Sinister book series. You're in for a treat.

Reviews of other novels by this author: The Duchess War