This was one of those titles that left me wondering who the mysterious Gentleman Nine was, and where the hell did Gentlemen One to Eight disappear.
And I was like oooh, nice wooork, girl! after finally reading about it.
Gentleman Nine,
by Penelope Ward was just the book I needed this weekend. Read below to find out why. 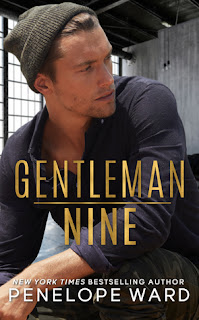 We were friends. Her, him and me. But we both wanted her and Rory knew that. So, before I left we promised to both leave her alone.
But when I came back, they were together and they were happy. So I left again. I couldn't believe he could betray me like that.
I couldn't believe she could love him, a nerd, and not me, the guy every other lady liked.

But now they broke up and, hell, if I'm gonna miss this chance. From the time I move in with her, I realize I have to take things slow. She still hurts for him. She needs to move on.

There is only one way for me to do now. And you will never guess what it is.

Shit, she's gonna do it. Shiiit.
That was what I was thinking for a few minutes while reading this novel. I thought Amber, our female protagonist, was going to make a big mistake.
There he was, her lifelong friend, a freaking handsome guy that lived in her house, and she went and found herself a...okay, that would be a spoiler.

This is a story about a woman and a man who had to grow up to be able to understand that there are things you don't just take because you want them. Nothing belongs to you by some divine right. You have to earn people and their love. You need time to prove you are committed and you do that by behaving in a certain way. That is what Channing was doing when he came to Amber. In the past, Rory did that too. But one of them ultimately gave up and then the three of them had to deal with the consequences that were anything but easy.

I wanted to hate this Rory guy so much, but the way Ward wrote this novel didn't let me feel anything but compassion for him (to a certain extent; I do want to make clear he wasn't my favorite). I think that is a clear characteristic of a skillful writer: to be able to show the world isn't black and white and not all people are bad by default. There are layers in all of us, and sometimes it takes time and a right person to reveal them. 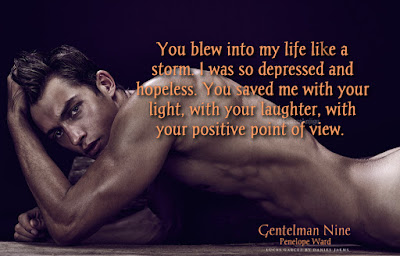 So now after talking about what is inside these covers, let take a moment and enjoy whats on them.
The guy who's pics I used to make this quotes is Lucas Garcez (on Instagram, @lucasgarcez93), the gentleman you can see on the covers of this novel, and can now google the hell of. You're welcome 😝

Another piece of info I wanted to share with you is that I've won Gentleman Nine in a giveaway on Instagram. Thanks to Sanela, a beautiful lady that made possible for me to have and read this book, I'm able to drool over it as we speak. I've read a few books by Penelope Ward so far, but this one I liked the most. Is it because Ward gets better with every novel she writes or because this book came to me under such lovely circumstances? I don't know. But I do know Sanela deserves more love, and you deserve more beautiful content. So be sure to follow her on Instagram (@love2read_) for amazing bookish news, new releases, and even a few giveaways.

Did you read anything by P.Ward? Which one of her novels is your favorite?

GENTLEMAN NINE ON GOODREADS
OFFICIAL WEBSITE OF THE AUTHOR
BUY THE BOOK HERE.