I can't believe it has been more than five years since I've read something by Raine Miller. I've read The Blackstone Affair and then the Cherry Girl, and now here I am again, this time with
Filthy Rich
Caleb Blackstone in Blackstone Dynasty book series. The book has been published in 2016, but we've just got our own translation in Croatia, with the same absolutely amazing cover. 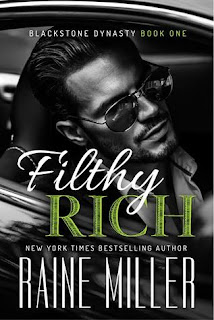 Caleb Blackstone met Brooke by chance, but he knew one thing right away: she would be his. In every way.
The more he got to know her, the more he realized how brave and strong she was. A survivor.
She's been through a lot, so Caleb knew he had to be very careful and move slowly with her - but somehow ended up doing exactly the opposite.
He couldn't help himself. He fell hard.
In love.

There's something so sweet about this novel. I felt so warm and fuzzy while reading it. Sitting in the sun, drinking coffee - that's how I started reading the first few pages. And then the whole experience somehow became so romantic.

Caleb is a true prince charming. He's so incredibly gentle and attentive, but also very unyielding and determined. Though he was raised in wealth and abundance, he doesn't shove that in our face. He mentions his luxury only when it's necessary to understand his actions.

Brooke is not one of those women who (sometimes in this kind of novels) spend too
much time insisting on showing her feminist tendencies, but she knows how to fight for
herself. Life taught her she hat to know, but she still managed to keep her fragile
femininity and softness - and that was what made Caleb fall in love with her.

Summer hasn't even started yet, and I'm already ready to declare these two characters
as the most romantic duo of the few following months.

Besides Brooke and Caleb, in Filthy Rich we meet a few of his siblings and friends. we can already guess one of them will be staring in their own novels. Some of them make us think they're completely innocent and some want us to believe them to be mysterious (those are my favorite😍).

At the moment, Filthy Rich is the first and only novel in Blackstone Dynasty book series, with the sequel, Filthy Lies, already announced.

Did you read anything by Raine Miller so far? Are you planning to?


FILTHY RICH ON GOODREADS
OFFICIAL WEBSITE OF THE AUTHOR
BUY THE BOOK HERE.