Kendall Ryan, Kendall Ryan all around me. While the author's busy releasing new novels (almost) every few weeks (Love Machine is to be published July 16, and Bro Code was published in May), recently I have been going through some of her older stuff.
Room Mate
was just published in Croatia, giving us just the perfect love story for these lazy summer evenings. The novel is the first one in Roommates book series, followed by The Play Mate, The House Mate, and The Soul Mate, all of which were published in 2017. Cannon and Page know each other whole their lives because he's her best friend's younger brother. They haven't seen each other in years so when Allie asks Page to make Cannon her roommate for two months, Page's everything but excited about it.
But after she sees him, it becomes even more important for Cannon not to move in. A geek with braces is now all grown up, broad-shouldered and hot as hell. And totally forbidden.

He decided to stay away from girls and one night stands. Cannon's luck with women is everything but good. Apparently, his wand really is magical, because after one night with him, every girl falls deep under his spell.
That's, actually, how he lost his place. One of his ex "girlfriends" broke into his apartment and he had to get away.
Besides, he should really focus on his studies and do right by his mother and sister.

But after moving in with Page, Cannon realizes them staying away from each other would be mission impossible. Any kind of sexual relationship between them would get both of them into real trouble.
So will they be able to stay away? 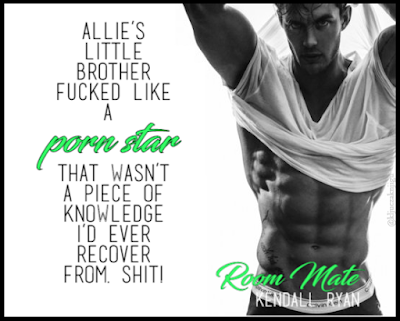 If you're a Kendall Ryan fan, there's one thing you know it's true: her books will make you have a good time. Her writing style is simple, easy to read, funny and recognizable.
She likes to go in medias res, avoids descriptions, long introductions and keeps the number of characters to the minimum.

In Room Mate, we have a girl falling for a 4 years younger guy - a refreshing change since we're often reading about girls (in their twenties) that end up with guys more than a decade older than them.
Cannon is also the one with a more complicated ARC since he's got more to lose.

But he's also very mature. Even though in the past he has made some lousy decisions regarding his "relationships" with women (absolutely unintentionally, of course 😉), he gets the fact that he has to become more serious so he could make some important decisions about his life. He owes that to his mother and sister.

Still, we can very much see the young and arrogant side of his personality (having the di*k of his size does make you think higher of yourself 😅) and that's exactly what will make us, like it made Page, fall hard for him. 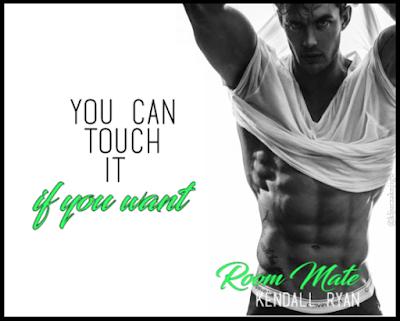 Room Mate is a simple but interesting, fast paceing novel that will make you relax. The relationship between the characters happens naturally, starting as a friendship, involving into something more sexual and ending up as a true romance. It's also possible to feel carachters' anxiousness and fear of disappointing their ones loved ones, that makes their story even more realistic.

The Bro Code, the book that Ryan has published a few months ago is actually pretty similar to this one. In both cases, we're dealing with a forbidden romance between a person and their best friend's sibling.

If you've never had the chance to read some of Ryan's novels, and you're looking for a new adult romance with a sweet happy ending, start with Room Mate.

ROOM MATE ON GOODREADS
OFFICIAL WEBSITE OF THE AUTHOR
BUY THE BOOK HERE.