As any other bookworm with a TBR list longer than there are days in all of the future years of my life (and I hope there will be many, many years 😅), I certainly did not have a place to put
The Chase
on. But then the book was published earlier this month, and somehow there I was, reading the book first chance I've got.
But you can't blame me! I'm just a fascinated reader trying to resist Elle Kennedy...Show me one person who could do that!
Nobody. Exactly. 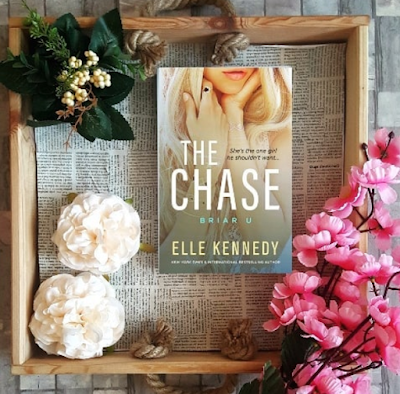 Summer Heyward Di Laurentis has no idea why she likes Colin Fitzgerald. The two of them are nothing alike.
But she still wants him. He plays hockey, his body's covered in sexy tattoos and her brother like him. He's perfect.
Until she realizes Fitzy doesn't like her at all.
And now she has to live with him!

But Summer is not a girl that would let one guy make her feel bad about herself. She's a good, friendly person. She's motivated and talented and most of all, she's determined to show people just how much she wants to succeed.

And Fitzy, the guy that once saw her as a shallow little girl suddenly becomes the person who believes in her the most. It seems Colin is just as scared of his feelings as she is of hers.
And that makes her perfect for him too. 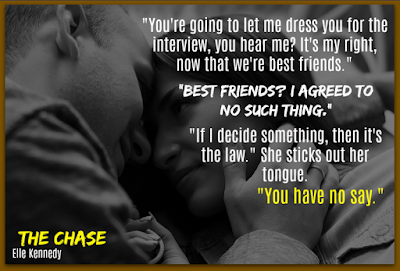 The Chase is the first novel in Briar U series, the brand new, new adult book series by Elle Kennedy. The series is a spin-off of Off-Campus series, featuring some of the characters we have already met in The Deal, The Mistake, The Score and The Goal.

The first thing I noticed about Briar U series is that the main protagonists here are definitely girls. Just like we had Garrett, Logan, Dean, and Tucker in Off-Campus, here the main center of our interest will be girls, starting with Summer (then Brenna and two more and yet unknown ladies). What leads me to believe it? First, the cover with a girl on it, then the name of the novel, because Summer is the one who chases his guy. And then the official blurb, narrated from her perspective.

And I do not mind that at all. I fell in love with Fitzy in Off-Campus but since we've read about both him and Summer, I got the idea that somehow she would be the 'dominant' part in their story (meaning that she would go for what she want, and Fitzy would resist). 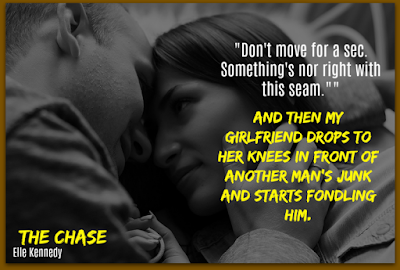 We have been waiting a long time for The Chase to finally be published, but once again, it was worth it. Summer and Fitzy are the textbook example of the fact that opposites sometimes really do attract. She's a social butterfly, a girl who loves and lives fashion, bright and friendly. And yet, so often judged and misunderstood. Summer has a learning disorder, and it gets her into many kinds of troubles, sometimes even those with very serious consequences.

Colin Fitzgerald is a tattooed nerd, a true introvert, a guy who fears the spotlight like most of us fear spiders or our neighborhood store going out of our favorite ice cream flavor. All his life, he was forced to hide his true emotions, torn between two parents that hated each other. It made him scared of showing his feelings for fear of being used, and that gives him the perfect excuse to run and hide before Summer, one girl who is determined to have him.

This novel features a bunch of hot as hell hockey players, a crazy fashion show, heartbroken friends, nerdy game players, a bit of dirty sex and two people head over heels for each other.

The Chase is a book that welcomes a new generation of students into Briar Universty, some nerdy, some arrogant, some daring, but all of them funny and insanely intriguing.

Seriously, does anybody even has to think twice before going for this book?


THE CHASE ON GOODREADS
OFFICIAL WEBSITE OF THE AUTHOR
BUY THE BOOK HERE.